The Stations of the Cross

Meditation at the Stations of the Cross is an ancient devotion traced back to the infant Church. Our Lord’s disciples used to walk the Way of the Cross in Jerusalem after his crucifixion. There they would meditate on the events of the Passion together or alone. There is also a tradition that this devotion was bequeathed to the Church by the Mother of Jesus, who was the first to meditate on the Passion of her Son in these ways. During an early period of persecution in Jerusalem the sacred places were damaged in an attempt to stop this practice. So the early Christians and those who were in exile used to meditate on the Passion in their homes by counting out the steps Jesus walked carrying the cross. By the time the Emperor Constantine restored the holy places in Jerusalem and it was possible for Christians to make pilgrimages, the Way of the Cross was used as a devotion wherever the Church was planted.

This particular Way of the Cross was carved in teak by Mother Maribel of our Community. Because she held positions of responsibility in the Community she had little time for such work and it took her 27 years to complete the set. This meant that on some levels the depictions of the Passion matured over time in her mind. By dwelling upon the composition of each panel throughout the events of her own life it gave the series a particular depth of insight and love. For those Sisters who knew her personally, it seemed that she had poured into these carvings something of what is stated in our Rule “Desiring to be conformed unto the likeness of your Lord, meditate often upon Him as dying upon the cross, stripped of everything”. Mother Maribel also added a 15th Station, the Resurrection of Our Lord, which anticipated perhaps, the development in recent years, of the Stations of Light which are now used all over the world in the Church.

Click here to Pray the Stations of the Cross. 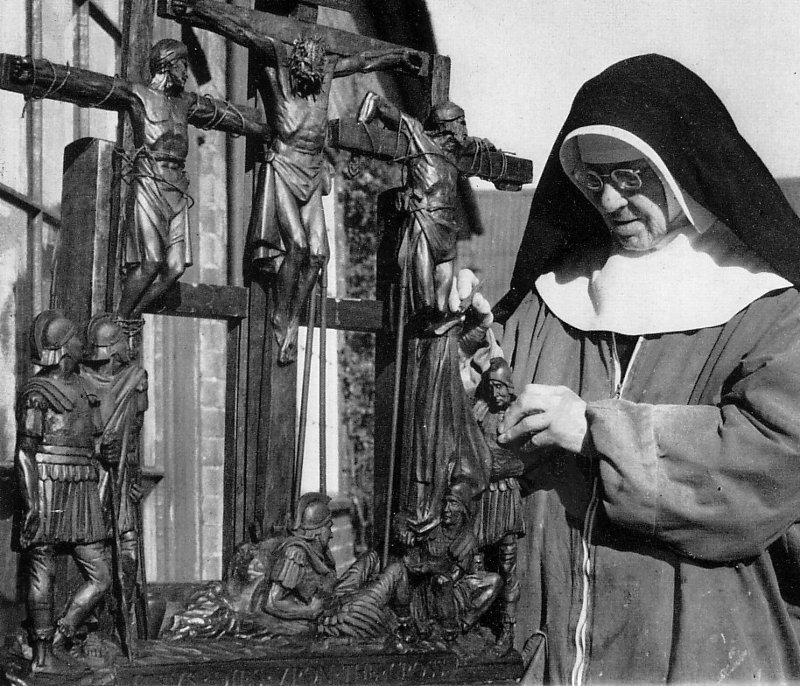 Mother Maribel carved the fifteen Stations of the Cross over a twenty-seven year period.