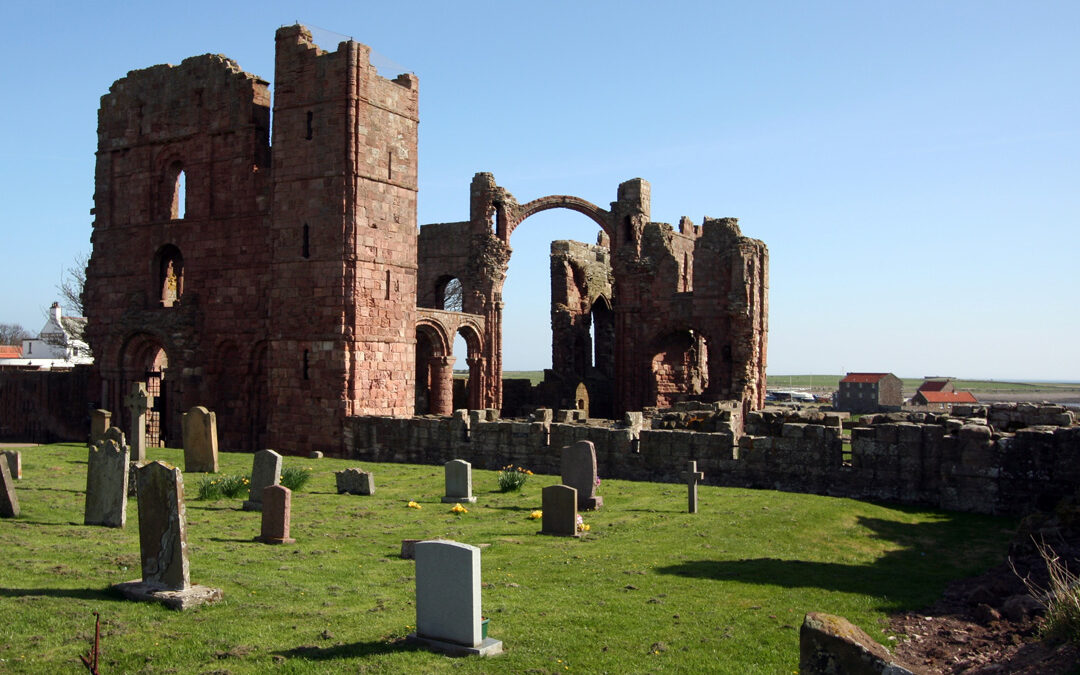 This wonderful retreat, organized and orchestrated by Rosey, finally took place in early May, having had to be postponed at least twice. We were 6 of us; 4 Associates, 1 Oblate and her friend. The retreat house, Marygate House, had stipulated that number because of covid precautions, so we had plenty of space with large bedrooms and individual bathrooms. Sam(antha) and Don, who ran it, were very kind hosts and provided delicious, home-cooked evening meals as well as breakfast and packed lunches if wanted. Sam is the curate to the parish, so we could see her in different mode at either morning or evening prayer at St Mary’s which is close by.

For people who haven’t been to Lindisfarne (or Holy Island) it is a very special and holy place and for those who have, I can understand the pull of wanting to return. I had never stayed on the island before and that has an extra quality about it when the day tourists have gone with the Causeway covered by water. The island seems to breathe a sigh of relief and return to being a nature haven with so many birds and spectacular views, beautiful light and a sense of history, space, and holiness. Marvellous ingredients for a retreat before one comes to the praying, worship, walking, reflecting and talks.

Rosey had provided us with plenty of introductory reading material before we came, whether on Celtic spirituality, the history of the Northumbrian saints, or Bible passages and poems on journeys or making a pilgrimage to use if we wished. As you may well know, pilgrims can cross Pilgrims’ Way on foot over the sand when the tide is low and end their pilgrimage on the island. I came by train to Berwick on Tweed and a taxi to the island, having found out the tide times, which still seemed quite a journey after so long being unable to travel.

Every evening we had Compline, sometimes the Wantage one and other times different ones, and a time of coming together. The first morning Rosey led us on a prayer walk round the town, stopping at various points and getting our bearings. The tiny central street houses a splendid museum on the landscape and the Lindisfarne gospels and the coming of the Vikings – something for everyone and the Lindisfarne scriptorium has the marvellous pictures, poems and prayer books created by Mary Fleeson and inspired by the island. We saw the ruined priory and the ruined castle and the fishing boats and the lookout point with views of Bamburgh on the mainland, among many other places of interest. In the afternoon we were very fortunate to have a talk by Kate Tristram, a canon locally who has written much on St Aidan and St Cuthbert and other saints and St Mary’s Church. Of the two she preferred Aidan because she thought so much hagiography had been written on Cuthbert it was difficult to discover the real man.

On Wednesday and Thursday Rev Ray Simpson, former guardian of the Community of St. Aidan and Hilda, gave us two thoughtful talks with time for questions and discussion. The first was on Creation as Sacrament, starting with how the Celtic church loved the gospel of John with Jesus, the logos, as the life source of the world. He felt that we had lost that connection with the sacredness of creation and how we might incorporate that sense in our daily lives. On Thursday his talk was on the Rhythm of Creation and was full of insightful pointers that we could use ourselves in how we live out our lives and particularly to detach ourselves from what we are addicted to, to try and live more in the moment and using the examen at the end of the day to reset ourselves with God. Both sessions ended with prayer and worship and a recognition of our companionship.

There was of course time for our own rest, refreshment and reflection. One of the most memorable moments was setting off as it was beginning to be dark to walk to the edge of the water near St Cuthbert’s island and see if we could see the seals. We split up into groups and after some while we met up and began to hear the seals ‘sing’ in the evening air – a haunting and beautiful moment. I think we all found our special places, whether walking or sitting – mine was sitting in the Gertrude Jekyll garden behind the castle and looking out to sea.
Reluctantly we returned home all too soon but with plenty to reflect on and re-energised.

All Associates run retreats and quiet days are open to all, for more information about retreat programme, content and approaches can be obtained from Rosey Feuell, Associates Retreat Secretary, on 01223 213305 / roseyleaf@talktalk.net