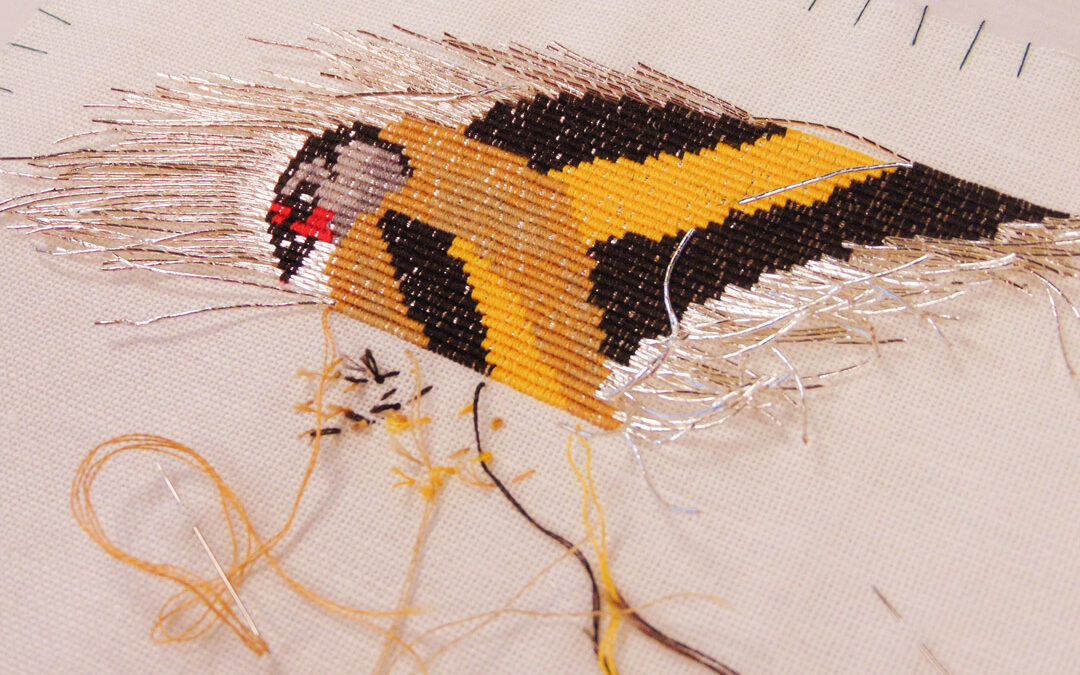 As the renovation work within St Mary’s Chapel was completed in November and the last of the dust swept away, the All Saints Embroidery Group were once again able to take up residence in St Cecilia, a spacious room within the cloisters of St Mary’s Chapel.  While the lighting in the chapel has been much admired, so too are the six new pendant lights installed in St Cecilia designed specially to cast an even light with minimal shadow. The feedback from the embroidery group is that the lights work exceptionally well and are a huge improvement on the individual lamps that had been in place before.  The group are grateful to have such a spacious and ambient studio from which to work. 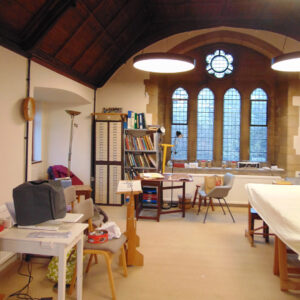 The All Saints Embroidery Group, established in 1986 have been meeting weekly here at CSMV for several years.  Their original home was All Saints Convent in Cowley, Oxford hence the groups’ name.  The Sisters of All Saints Convent ran a busy embroidery workshop, but when their last experienced embroiderer, Sr Lilian Mary, died in 1985 there was sadly no one able to take up her mantle.  Suellen’s experience was called upon by the Sisters and by 1986 she happily found herself running the group.

The group’s work specialises in ecclesiastical embroidery.  There are currently six members Suellen Pedley, Helene Listercheese, Helen Saunders-Gill, Kathleen Griffiths and Juliet Teare, with Sr Lorna too who had been working with the group at their All Saints Convent workshop before the group moved to CSMV.  The fine work of these women, and that of previous members, adorns many churches and cathedrals in Britain as well as overseas, even as far away as Australia. 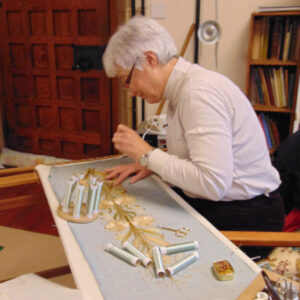 Helene Listercheese is working on a beautiful goldfinch embroidery (pictured) using ‘Or Nue’ which is a technique widely used in the 15th century. Artists would paint a canvas with the design and the workers would then lay down gold thread changing the stitching colours according to the colours on the canvas, a little like painting by numbers.  The effect is a raised linear style of embroidery where golden flecks are intermittently glimpsed through the coloured stitching.  There are many famous pieces from the 15th century still in extant, one of the best pieces being the vestments of the Order of the Golden Fleece, in Spain.  Or Nue is a very labour intensive technique and not widely worked these days so the group enjoy keeping this wonderful technique still alive.

The goldfinch is symbolic of the passion of Christ, and in much Renaissance art the Christ child can be seen holding a European Goldfinch which serves as a prediction of his death.  Goldfinch feed on thistles and thorns and so the legend goes that the red spot on its head was a drop of Jesus’ blood left as the bird plucked at Jesus’ crown of thorns.  Suellen places great importance on the role of symbolism in ecclesiastical embroidery and relishes the opportunity to continue this very important and sometimes forgotten imagery into the 21st Century.

Another recent and quite remarkable commission was the altar frontal for Corpus Christi College’s chapel to commemorate the foundation of the college.  It features a golden Pelican in her Piety standing tall with wings stretched, embroidered by Kathleen Griffiths, showcasing techniques of gold thread couching. Gold thread (cotton thread wrapped in a fine gold foil) cannot be threaded into a needle and sewn because it would shred if passed through fabric. So instead, it is sewn in place by a matching cotton thread. This allows the gold to shine without any colour.  Aside from the gold thread couching, the design features gold leather applique and an emerald beetle wing for an eye. The pelican is used on the arms of the college and so, along with being symbolic of the sacrifice of Christ, made for an appropriate subject for the frontal.

We look forward to following the creative undertakings of the All Saints Embroidery Group throughout 2022. 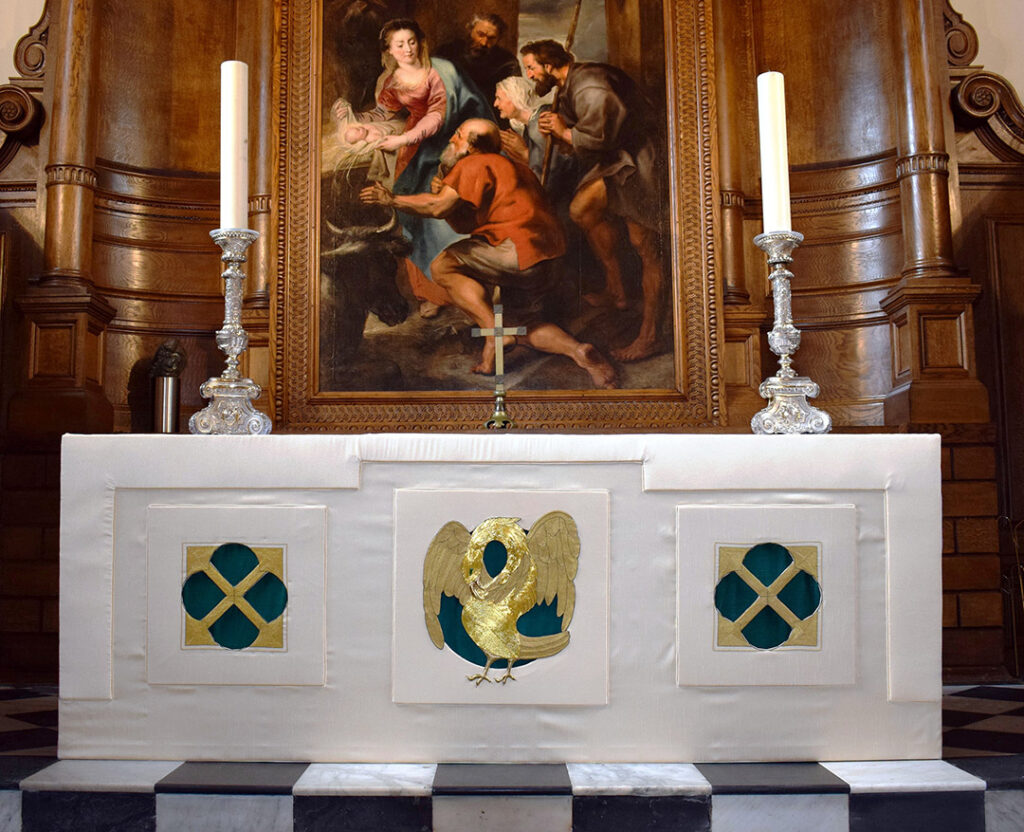