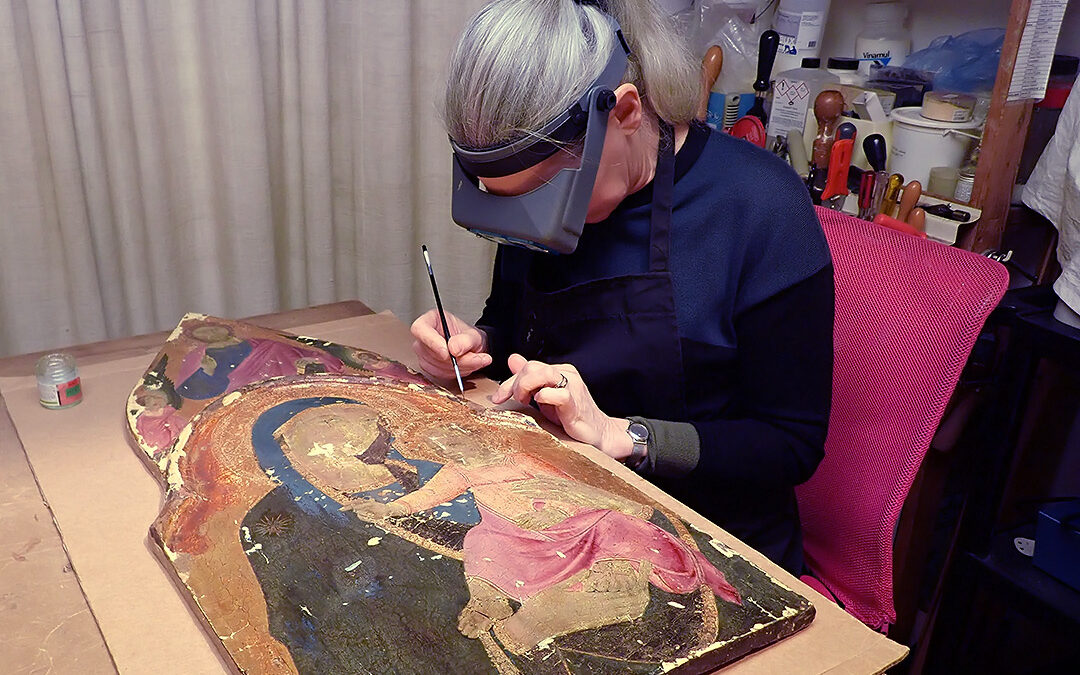 We are fortunate to have a wonderful 14th century painting of the Virgin and Child. This year, art conservator Ruth Bubb has, over several months, worked on restoring it, and it now hangs in our new entrance building. Ruth writes here about the painstaking work, which has gone into transforming this beautiful piece of art.

“Conservation of the panel involved removing crude twentieth century and earlier restoration. Original materials were stabilised and damaged paintwork retouched. The aim of retouching was to minimise the distracting visual noise created by losses in the paint film, not to make it look new, but to present a legible, coherent image. The panel is a fragment of a larger object. It has lost most of the integral frame that would have surrounded the image with a gilded plinth and pinnacles, so part of the project was also to devise an appropriate way of displaying it. It is now displayed in a protective glazed box frame against a red fabric that picks up one of the dominant colours in the image and is also a traditional analogue for gold. The panel sits in a moulding that suggests, without reproducing, the lost framing elements.

The conservation treatment offered an opportunity to make a limited study of the materials and imagery of the painting. The surface of the painting was examined through the microscope and three tiny flakes of paint were studied in cross-section. The artist’s underdrawing was examined by infra-red reflectography. We hoped to see outlines that would help reconstruct the Virgin’s damaged features but unfortunately this was not the case, so the retouching was based on the faces of the Child and angels. The style of drawing suggests the artist was using a familiar workshop pattern.

The materials and techniques used by the painter follow closely those described in Cennino Cennini’s treatise on painting, written in fourteenth century Italy: the panel was prepared for painting with a layer of canvas underneath a white gesso. Incised lines were used to mark out the areas to be gilded. Gold leaf was applied over a red bole layer and decorated with punching and painted jewels. The flesh tones were underpainted in a green earth pigment, visible today because the upper paint layers are so worn. The painting of the Virgin’s blue mantle makes most economical use of costly pigments. A greenish blue layer, probably azurite, was applied over a dark grey undercoat. The most precious blue pigment, natural ultramarine, was reserved for the uppermost paint layer. The paint medium was most likely egg tempera, but the robe was overpainted by a restorer using oil paint. Even after removal of the overpaint, the oil has irreversibly darkened the blue. Another type of gilding was used to decorate the figures’ garments with fine gold borders, and to represent the stars on the Virgin’s mantle. The Child’s robe was originally glazed with red lake, also an expensive colour, but this has faded except where it was protected by gilded decoration.

This panel shows the influence of the Florentine Taddeo Gaddi but combines stylistic elements of both Florentine and Sienese art of the fourteenth century. This may be because the whole region was devastated by the plague of 1348. Workshop organisation and the flow of commissions were disrupted, obliging surviving makers to make contacts and work further afield.”

This website uses cookies to improve your experience while you navigate through the website. Out of these, the cookies that are categorized as necessary are stored on your browser as they are essential for the working of basic functionalities of the website. We also use third-party cookies that help us analyze and understand how you use this website. These cookies will be stored in your browser only with your consent. You also have the option to opt-out of these cookies. But opting out of some of these cookies may affect your browsing experience.
Necessary Always Enabled

Any cookies that may not be particularly necessary for the website to function and is used specifically to collect user personal data via analytics, ads, other embedded contents are termed as non-necessary cookies. It is mandatory to procure user consent prior to running these cookies on your website.