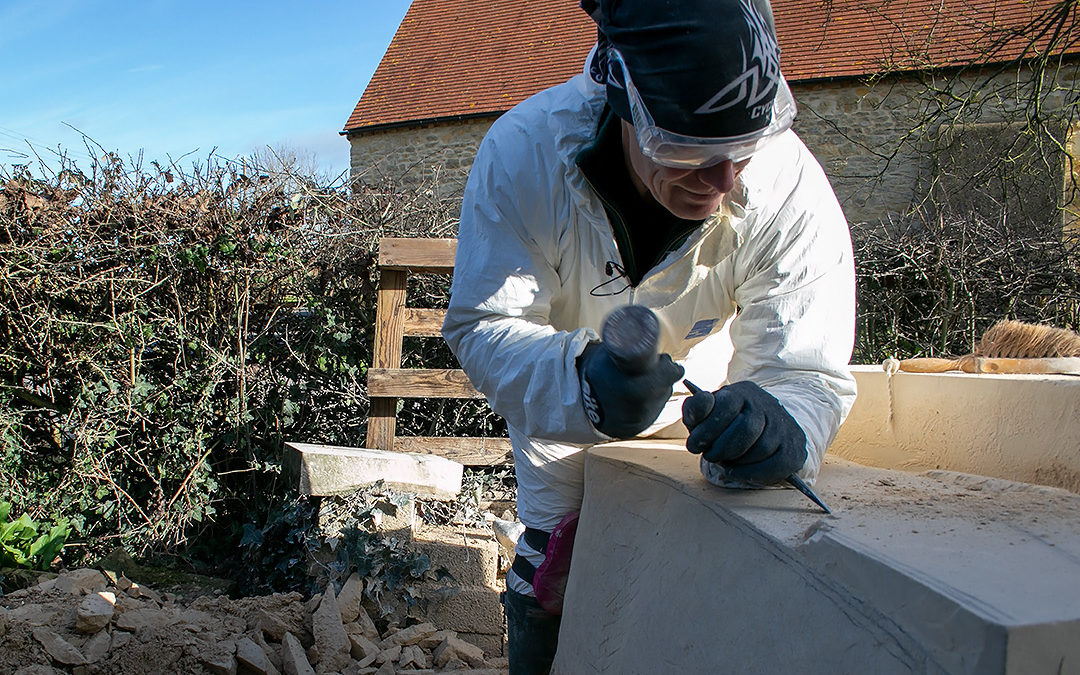 Artist Nicholas Mynheer has started work in his garden on three large blocks of English limestone taken from a quarry near Bath. By September he will have chiselled and worked the blocks into a slightly-larger-than-life size sculpture of a working Mother holding up her infant son. The sculpture will be a centrepiece of the current refurbishment of St Mary’s Convent. As visitors approach the new reception area at the Convent, they will be welcomed by this striking new sculpture of Mary and the Christ-child.

“It’s very hard, very slow work,” says Nicholas. “Each block will take a couple of months to shape and carve and even though it appears to be monotonous work, you can’t switch off at any point. That’s when you make mistakes.”

Among his tools, Nicholas is using chisels given to him by Sister Bridget Mary from the Community at Wantage. “How perfect that I’m using her old tools to carve a piece that’s going to go outside the convent,” he says.

The work of chipping away at the huge stone blocks is very physical. “But that’s one of the things I like about it. It’s not easy,” says Nicholas. “There’s no quick way. If you use power tools, you can easily make a mistake and there’s no going back. A surgeon friend of mine says, you think twice and cut once, which is very true. If you take off too much stone, you’ve had it. You can’t put it back.”

“Although the stone’s hard, it always surprises me that you can get the most extraordinary amount of emotion in the material, just by changing the angle of the chisel,” says the artist, whose work encompasses biblical themes.

Surprisingly, Nicholas says that he doesn’t lose much time to the weather working outside. The rain is a problem as he doesn’t like to work under cover and a slight breeze is good as it blows the stone dust away from the work. “At this time of year (late January) I’ll work to about 4 o’clock, then the light’s gone and by then I’m absolutely physically exhausted,” he says.

Nicholas will continue to chip away at his task. The completed sculpture will be put in place at the Convent in late summer, in time for the opening of the refurbished Convent buildings.

We’ll be following Nicholas’ work throughout the year and hope to bring you another update in late March.